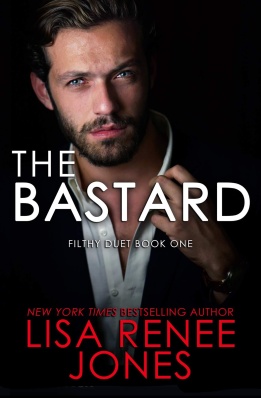 I’m the bastard child, son to the mistress, my father’s backup heir to the Kingston empire. He sent me to Harvard. I left and became a Navy SEAL, but I’m back now, and I finished school on my own dime. I’m now a few months from being a billionaire myself. I don’t need my father’s company or his love. My “brother” can have it. I will never go back there. I will never be the mistake my father made, the way he was the mistake my mother made.
And then she walks in the door, the princess I’d once wanted more than I’d wanted my father’s love. She wants me to come back. She says my father needs to be saved. I don’t want to save my father but I do want her. Deeply. Passionately. More than I want anything else.
But she’s The Princess and I’m The Bastard. We don’t fit. We don’t belong together and yet she says that she needs me. We’re like sugar and spice, we don’t mix, but I really crave a taste. Just one. What harm can just one taste do?

“This is a bad idea,” she whispers, but her voice is raspy, affected, the taste of her hunger damn near on my tongue.

I kiss her, a quick brush of lips, and a lick that has the heat between us damn near explosive. “Still think it’s a bad idea?”

Her hands flatten on my chest but they flex rather than push. “We both know this is wrong.”

“And yet you followed me here.”

“You said that already,”

“You knew what would happen,” I accuse.

I certainly know where anger and family collide, in ways I won’t explain to anyone. My jaw sets hard and I release her, putting a wide step between us. “Stay or go, but if you stay, you’re going to end up naked.”

“I know your father’s an asshole, but my mother loves him and my father’s company is now a part of this one.”

“The part where I said that if you stayed, you’d end up naked.” I reach for her and pull her to me. “You did understand that, correct?”

“I don’t scare off that easily. If I did, I wouldn’t be working for your father and under your brother.”

“It’s me I want you under,” I say, molding her close, my hands sliding up her back.

“I’m too young and stupid for business, but I’m just right to fuck?” she challenges.

“I’m warning you, Harper, not talking down to you. And if you’re young and stupid, so was I.”

“You wanted to be here,” she says.

“Yes,” I say, tangling my fingers into her hair. “I wanted to be here, just like I want to be right here, right now, with you.” My mouth closes down on hers once more, a deep thrust of tongue that’s as unforgiving as my father would be if it came down to choosing her or Isaac. It’s all about demand and I expect her to push back, to give me the rejection that sends her to the door and me to the fucking airport. That’s not what I get.

Her hand on my chest doesn’t push me away. She moans and her elbow softens, those perfect curves I’d admired from a distance now pressed nice and close, right up to the moment she jerks back. “My God. What are we doing? You’re my stepbrother.”

I walk her back against the wall, my hands caressing up her ribcage to cup her breasts. “I told you,” I say, stroking my thumbs over her nipples. “I’m not your fucking brother. Not now. Not ever.” I cup her face, lean in and my mouth finds her mouth, and if she thought my tongue unforgiving before now, she was wrong. This is unforgiving. It’s in my blood. It’s who I am, who I was born to be. A bastard who wants her.

I toss the jacket, rip away my tie, and she doesn’t run away as I half expect she will. She closes the space between us, her fingers on my buttons, working them down my shirt, but when one hand slides down to my crotch, I react. I slow things down before I fuck her and this is over, and when it is, I’m gone. Suddenly I’m not ready to leave, which is why I turn her to the wall, and force her hands to its surface, yanking down her zipper before I pull my shirt over my head. I step into her, my erection at her backside, my lips at her ear.

“You saw me watching you across the pool,” I say, my fingers catching the straps at her shoulders.

“Of course I saw you. You wanted me to see you.”

My fingers tangle in her hair and I pull her to me. “And since you’re here,” I add, “I will assume you got that message loud and clear.”

“I’m still angry and you’re still an arrogant asshole, but apparently it doesn’t matter, so fuck me before I come to my senses.”

I press my cheek to hers, my hand on her cheek, lips by her ear. “I promise to use my tongue in all the right places to make sure you have no regrets.”

She pants out a breath that tells me my words affect her and I’m right there when she does, kissing her again, drinking her in, and damn she tastes good; one part innocence, one part a drug that knows how good it feels. And she does feel so fucking good.

I scoop her up and carry her through the living area to the bedroom, because hell, I don’t know, it just feels like I should fuck her on the bed, though I could have easily kept her right there by the door. I want this woman. I want her in a bad way and I wanted her from the moment I saw her by that pool. I set her on her feet and I pull her close. “This is where I lick and you come on my tongue.”

New York Times and USA Today bestselling author Lisa Renee Jones is the author of the highly acclaimed INSIDE OUT series.

In addition to the success of Lisa’s INSIDE OUT series, she has published many successful titles. The TALL, DARK AND DEADLY series and THE SECRET LIFE OF AMY BENSEN series, both spent several months on a combination of the New York Times and USA Today bestselling lists. Lisa is also the author of the bestselling WHITE LIES and LILAH LOVE series.

Prior to publishing Lisa owned multi-state staffing agency that was recognized many times by The Austin Business Journal and also praised by the Dallas Women’s Magazine. In 1998 Lisa was listed as the #7 growing women owned business in Entrepreneur Magazine.