“I was going to destroy her the same way she destroyed me, from the inside out.”

Isla made one teeny little mistake. Now she and her PI company, Dirty Exes, are being targeted by one seriously angry and furiously sexy ex-quarterback. Jessie freakin’ Beckett. But there’s no way some NFL superhunk is going to take her business away. If only he didn’t make her so hot—and bothered.

Jessie wants payback for a ruined reputation. His plan? Top secret. His hard-to-hide arousal for Isla? Not so much. Especially when they let down their guards and sneak a kiss. Like any juicy scandal, it goes so viral, so fast, that only a good lie can combat the bad press. Mortal enemies in a fling? No way. Um…this is love!

Isla’s not faking it. Jessie can’t. As the game of let’s pretend gets real, Jessie forgets all about revenge. That’s the problem. His plan is already out of his control. Now it could undo everything they’ve been trying to build. Coming clean may be the only thing that can save it. 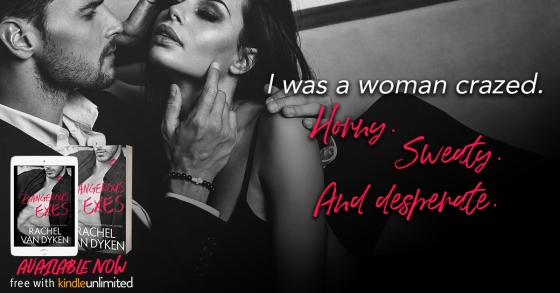 I would say Dangerous Exes is an enemies to lovers story, but, oh boy, it is more than that.  It’s more like friends to enemies to friends to enemies to lovers!  This story is such a whirlwind of craziness!  It felt like the train wreck that you can not look away from but are afraid to look at.  There was so much back and forth between Jessie and Isla and Colin and Blaire, that it teetered on the line of too much.  But luckily it never crossed the line, whenever I felt “wow this is going too far” she reeled it back in.  Then enter Goo-Poh, and oh my!  She’s the best character I have read in quite a while

It is definitely an entertaining story and it will have you laughing out loud from time to time.  It is the second book in the series, but it can be read as a stand-alone, but it is so much better if you read Blaire and Colin’s story first in Dirty Exes.

Rachel Van Dyken is the New York Times, Wall Street Journal, and USA Today Bestselling author of regency and contemporary romances. When she’s not writing you can find her drinking coffee at Starbucks and plotting her next book while watching The Bachelor.

She keeps her home in Idaho with her Husband, adorable son, and two snoring boxers! She loves to hear from readers!