Title: Shopping for a Billionaire’s Baby
Series: Shopping for a Billionaire #13
Author: Julia Kent
Genre: Romantic Comedy
Release Date: April 24, 2018
Blurb
You know what’s even better than marrying a billionaire? Having his baby.
We’re ready. We’ve studied and planned, read all the birth and labor
books, researched parenting classes, consulted our schedules, and it’s time.
And by we I mean me.
Declan’s just ready for the “have lots of sex” part. More than ready.
But there’s just one problem: my husband and his brother have this little
obsession with competition.
And by little, I mean stupid.
That’s right.
We’re not just about to try to bring a new human being into the world.
We have to do it better, Faster, Stronger.
Harder.
McCormick men don’t just have babies.
They engage in competitive billionaire Babythons.
I thought the hardest part about getting pregnant would be dealing with
my grandchild-crazed mother, who will go nuts shopping for a billionaire’s
baby.
Wrong.
Between conception issues, my mother’s desire to talk to the baby through
a hoo-haw cam, a childbirth class led by a drill sergeant and a father-in-law
determined to sign the kid up for prep school before Declan even pulls out, my
pregnancy has turned out to be one ordeal after the other.
But it’s nothing — nothing — compared to the actual birth.
Shopping for a Billionaire’s Baby is the newest book in Julia Kent’s New York Times
bestselling romantic comedy series and is a 400+ page full-length novel.
ADD TO GOODREADS 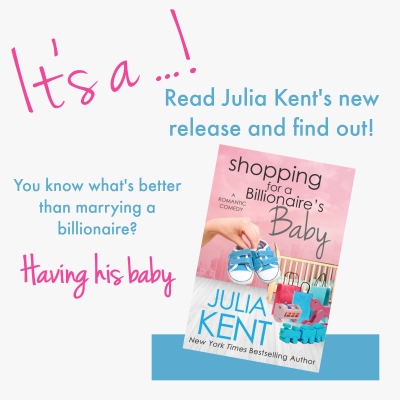 “Just because other people can’t get their act together as parents doesn’t mean we
can’t,” I explain. “There is no process that can’t be project managed into a well-oiled machine, babies included.”

Andrew snorts. “You really believe that.”
“A baby is like a disruptive new technology. But our first deliverable is still eight
months to a year away. That leaves us plenty of time to update our practices
and diversify into new areas. Find the best people, incentivize them, and keep
them in their swim lanes.”
I’m getting major raised eyebrows here.
“Optimization protocols, testing, fine tuning, and putting together the right team is all it takes. Drill down to the essentials, find people who are the absolute best at
what we need, and that’s it–we build a life based on optimal outcomes.”
“You sound like you’re making a robotic dog, Dec. Not a human.”
“This baby will have a hands-on father. Plenty of love. And with a mother like Shannon, how could we go wrong?” Mother. Calling Shannon a mother does something to my gut. A tug, hard and emotional, destabilizes me for a second. 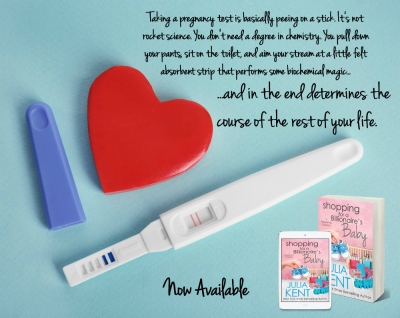 Oh how I’ve missed Declan and Shannon! While sometimes I think they are the world’s unluckiest couple, they aren’t because they have each other. I love Declan so much. Even though he is a strong, ruthless business man, he is also the sweetest, most attentive husband. Declan cherishes Shannon period, but absolutely worships her while she is pregnant.  So, this is the story of the pregnancy and birth of their child. It covers a lot of time but does it seamlessly. It was so enjoyable and even though it was long, I wished that it would never end. I am so happy that there will be even more books in this series. I never want their story to end. I definitely recommend reading the first one, Shopping for the Billionaire, and the ones after as it gives you the basis for this wacky, charming couple!

New York Times and USA Today Bestselling Author Julia Kent
writes romantic comedy with an edge. From billionaires to BBWs to new adult
rock stars, Julia finds a sensual, goofy joy in every contemporary romance she
writes. Unlike Shannon from Shopping for
a Billionaire, she did not meet her husband after dropping her phone in a
men’s room toilet (and he isn’t a billionaire). She lives in New England with
her husband and three sons in a household where the toilet seat is never, ever,
down.
Author Links
WEBSITE
FACEBOOK
FACEBOOK GROUP 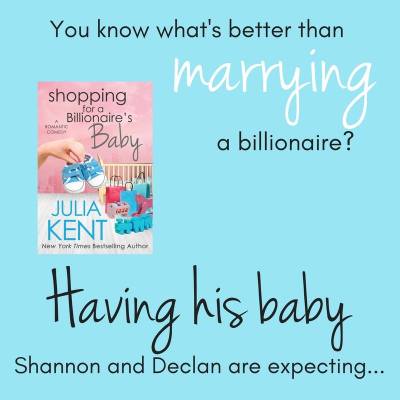