Misadventures With A Rookie by Toni Aleo is the HOT HOCKEY romance you’ve been waiting for! AVAILABLE NOW! 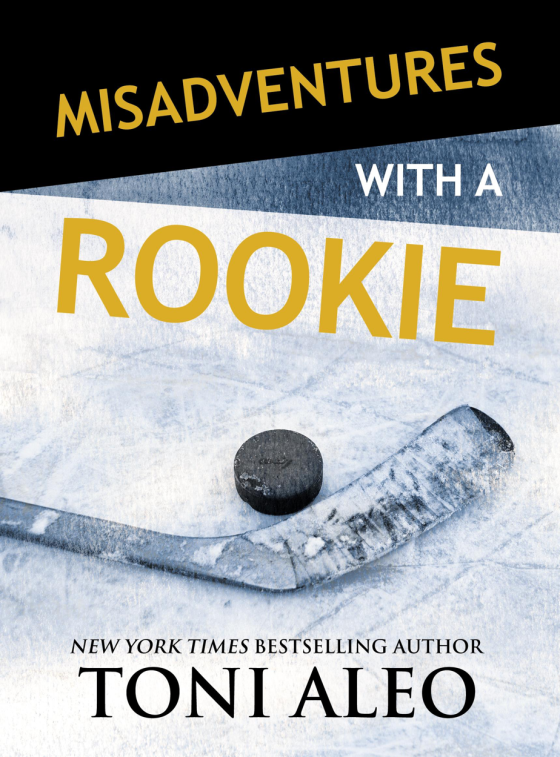 Winning has always come naturally for stud ice hockey defenseman Gus “the Bus” Persson. On the ice or off, he’s never had any trouble scoring, racking up goals—and girls. As the best player in his rookie class and the number-one draft pick of the Malibu Suns, he’s taking his game to the next level and is justifiably full of swagger.

So why does one of the Suns’ ice girls treat him like he’s invisible?

Bo St. James doesn’t have time for rookie hotshots who think their gloves don’t stink. She knows them, she works with them, she trains them. It doesn’t matter that Gus Persson is the hottest newbie she’s ever seen. She knows his type. She’s got big plans of her own, and she’s not going to let some cocky rich kid athlete keep her from her goals.

But there’s a chemistry between them they cannot deny. A lust that burns so hot, it threatens to melt the very ice on which they make their livings. The game has changed for both of them. Together, can these two play to win?

Misadventures with a Rookie by Toni Aleo is a sexy love story.  The chemistry between Bo and Gus is sweetly refreshing, I simply could not stop reading. Well, I do have a soft spot for sexy hot hockey players 😉  Both characters complemented each other so well with their different personalities.  Toni Aleo did a superb job with her writing, she made me feel like I was taking part of the journey with Bo and Gus.

My name is Toni Aleo and I’m a total dork.I am a wife, mother of two and a bulldog, and also a hopeless romantic.I am the biggest Shea Weber fan ever, and can be found during hockey season with my nose pressed against the Bridgestone Arena’s glass, watching my Nashville Predators play!When my nose isn’t pressed against the glass, I enjoy going to my husband and son’s hockey games, my daughter’s dance competition, hanging with my best friends, taking pictures, scrapbooking, and reading the latest romance novel.I have a slight Disney and Harry Potter obsession, I love things that sparkle, I love the color pink, I might have been a Disney Princess in a past life… probably Belle.… and did I mention I love hockey?