Jed Had to Die by Tara Sivec

The happiest day of Payton Lambert’s life was the
day she graduated high school and watched Bald Knob, Kentucky get smaller and
smaller in her rearview mirror. She wanted more for her life than a tiny town
where everyone knows your business and you can’t find a decent cup of coffee
for at least forty miles. Twelve years later, an unexpected phone call in the
middle of the night has her packing up her life in Chicago and racing back home
to the one person she ever regretted leaving behind.Upon her return, she sees that Leo Hudson, the scrawny boy who followed Payton
around like a puppy and could recite cow insemination facts in his sleep, is
long gone. Leo is still hot on her heels, but now he’s wearing a sheriff badge
and dead set on solving a murder that may or may not involve Payton…along
with half the town. In a place where the biggest crime happened the day someone
kicked a few of his cows, people are pointing fingers, rumors are spreading
like wildfire, and Payton swears she’s only making out with the sweet-talking, studly
sheriff to distract him from the secrets she’s keeping.

When you’ve been tased, peed on by a yippy dog named Bo Jangles, and can’t stop
picturing what Sheriff Hudson looks like naked, it will be a tough job making
everyone agree that…Jed had to die.

4.5 STARS
Let me start out by saying that I adore any book written in the South that has snarky characters. So it should come as no surprise that when I saw that Tara Sivec had written a book that takes place in a town called Bald Knob, Kentucky, I jumped on that sucker! Jed Had to Die was everything that I hoped for and more – snark, witty retorts, foul language, sex, more snark and a murder mystery thrown in for good measure.
Honestly, I spent most of the book feeling a little bad for Payton. Those bitches in Bald Knob need a bald knob, if you get my drift. What I loved most about her though is that she just mostly let it roll off her back and kept being her awesome self. She is an awesome friend to Emma Jo, dropping everything to come back to her hometown as soon as she was called.
And then there is Leo – none of the FFA nerds in my school turned out as hunky as he did!
He and Payton together were oh la la hot.
Jed Had to Die is a must read. In fact, I will say it is in my Top 10 of 2016. She took a serious topic and put a spin on it. Tara’s writing has a certain charm to it where you can’t go wrong picking up her books.
Oh yea – Jed HAD TO die….Jerk…. 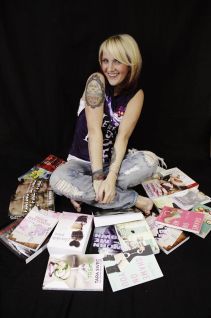 http://bit.ly/2aKaUr3
http://bit.ly/2aCTefPTara Sivec is a USA Today best-selling author, wife,
mother, chauffeur, maid, short-order cook, baby-sitter, and sarcasm expert. She
lives in Ohio with her husband and two children and looks forward to the day
when they all three of them become adults and move out.

After working in the brokerage
business for fourteen years, Tara decided to pick up a pen and write instead of
shoving it in her eye out of boredom. Her novel Seduction and Snacks won first
place in the Indie Romance Convention Reader’s Choice Awards 2013 for Best
Indie First Book and she was voted as Best Author in the Indie Romance
Convention Reader’s Choice Awards for 2014.
In her spare time, Tara loves to
dream about all of the baking she’ll do and naps she’ll take when she ever gets
spare time.
Tara loves tackling new genres
so there’s something for everyone! Currently, she has books in the following
categories: