Maxine Daniels was made an offer that she couldn’t refuse. She couldn’t think of a better time—after breaking things off with her fiancé—to change cities and merge her company with Saunders Literary Agency. At thirty-three, she isn’t getting any younger, so it’s time to start fresh and leave her past behind.

What she doesn’t anticipate is the diversion that lies ahead. Kyle Saunders is a catastrophic tsunami that enters her life and consumes her world in just a matter of minutes. Everything about him is telling her no, but her heart and the heat between her legs is screaming yes. He was never a factor in her divine plan—nor was she in his.

Kyle is the cliché bachelor; he is a twenty-four-year-old charismatic chick magnet who refuses to settle down. He’s dead set on living the carefree single life—that is—until Max comes strolling in. Then all his ridiculous rules fall to the wayside. Who knew that just one hello could alter their lives forever? 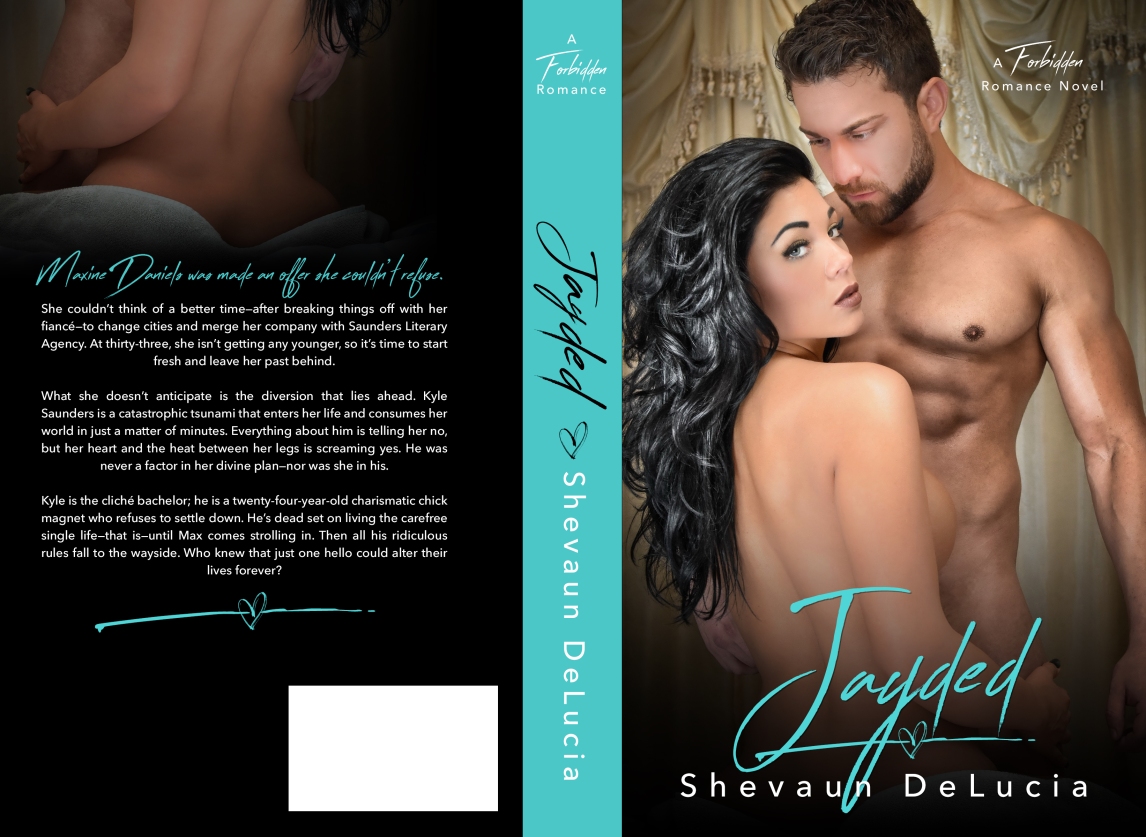 Love, desire, and the undeniable hunger for another living being is something Jeffrey Bauer knows nothing about. Women have always been drawn to him like moths to a flame. But, he’s been careful to never indulge in the same woman more than once; it’s a rule he has always abided by. A rule that has kept him safe—until now.

Jeff’s impervious world now crumbles to the wayside once he crosses paths with her—Elise Jewels. She knocks down his walls with just one glance. She grabs ahold of his soul, without permission, and keeps it hostage. She’s become the exception to his simple rule.

Elise screams innocence and purity—a beauty that Jeff doesn’t want to taint. He has to decide to embark on his deepest desires with Elise or to save her from himself by staying far away.

Will he be able to fight the irresistible pull she has on him? Or will he allow her to slip away?

Junior Saunders is searching for the perfect woman: gracious, elegant, and meek. He waits patiently, working long hours and going home alone night after night, believing that this woman exists. But life isn’t always predictable; curveballs can be thrown unexpectedly.

Kinsey Balterson is everything but gentle, delicate, and docile. She says it like it is—a spitfire, full of sarcasm with looks to kill. She’s downright sexy and thrilling in every way possible. Kinsey is a constant reminder of everything Junior detests in a woman, but the moment he lets his guard down, she captures his attention.

From this moment on, nothing is the same for Junior again. Everything he thought he wanted and needed no longer exists, and now his whole world has been shifted. His reason for breathing consists only of her—Kinsey. She has become his everything.

Kinsey thinks she has this all under control: friends with benefits, no strings attached—no messy feelings. She refuses to be broken again. But what happens when attraction turns into something deeper? Will Kinsey be able to let her walls down so her damaged heart can love again?

Shevaun DeLucia, author of the Eternal Mixture Series and A Forbidden Love Series, lives in upstate New York with her husband, four children, and two dogs. As a stay-at-home mom while her children were young, she fell in love with reading. She indulged in the small moments that took her away from the reality of her loud, rambunctious household, bringing her into a world of fantasy. When reading wasn’t enough to satisfy her, she turned to writing, determined to create the perfect ending of her own.