An investigator’s search for a friend draws her into a world darker than she could have imagined.

Sara Adams awakes blind, unable to remember the most basic details of her life, but her darkness seems a blessing when she discovers the terrors of The Light.

Stella Montgomery investigates the news on the mean streets of Detroit, where she’s noticed a disturbing trend: young women are vanishing. When her best friend disappears, Stella investigates—despite warnings from her police detective boyfriend—following a twisted trail that leads her through the city’s most dangerous and forsaken precincts. There she uncovers something more sinister than she could have imagined: a shadowy organization known as The Light, led by the enigmatic Father Gabriel.

As Sara struggles to understand her place in the strange world she’s awakened to—an oppressive cult demanding unquestioning obedience—and her feelings for Jacob, the husband she can’t recall and whose harsh and tender attentions confuse and beguile her, Stella risks all to discover the truth. But enlightenment always comes with a price…

Published through Thomas and Mercer and scheduled to be released June 14, 2016

My thoughts drifted to that night after service, the hunger in Jacob’s touch and the way his lips had claimed my body. Just the memories made me tingle. Lying back on the bed, I held my side and sighed. If only he weren’t so worried about my ribs.

Courtesy of the truck ride yesterday, the injury was more aggravated then it had been. I’d tried hiding it. Shaking my head, I wondered if it was possible to hide anything from him. According to Elizabeth it wasn’t allowed. The way I saw it, I wasn’t lying. I was withholding information for the benefit of both of us. By the way his breathing became labored and his body hardened that night at the clinic, I wasn’t the only one who wanted to make love.

It seemed as if it didn’t matter if I told Jacob what I was thinking or not; he knew. Somehow he always seemed to know, sometimes even before I did. Maybe it was because we’d been together so long.

If only I could remember how long.

The sound of the rising garage door pulled me from my carnal thoughts, and I covered my cheeks. With a giggle I hoped they weren’t as flushed as they felt. If they were, he would know what I’d been thinking . . . I shook my head. I didn’t want that conversation. Exhaling, I willed the pink away.

When I heard the garage door lowering, I stood and made my way toward the stairs. Wearing the boot on my right foot made walking with my cast much easier. As I approached the landing, I took a deep breath and visualized the stairs. Since I’d counted them multiple times, I knew there were fifteen steps. I might not have my sight, but I was trying to be as self-sufficient as possible. I made it only to the second step from the top when I heard his voice.

“I’m coming down,” I called, taking one step at a time, cautious not to go too fast.

Even before I reached the bottom step, I knew he was there. When we went to service, I’d realized why I associated him with the scent of leather; it was his coat. When he wasn’t wearing it, just the right amount of aroma lingered around him. When he wore it, as now, the leather scent was overpowering. That, plus the sound of his boots walking and stopping on the wood floor, prompted me to stop on the fourteenth step. If I went one more, I was afraid I’d run into him.

Gripping the banister, I tilted my face toward his. Smiling and hoping my cheeks had returned to their normal color, I replied, “Yes?”

“Did you hear the garage door go up?”

“And what did you think that meant?”

“I assumed it meant you were here.”

“So you knew I was home and yet you chose to not greet me?”

“Answer me,” he demanded, his tone now too calm. “Why weren’t you waiting for me at the door?”

The thoughts I’d entertained upstairs evaporated. I knew this tone. I not only recognized it, but with everything in me, I wanted to avoid it. My heartbeat quickened and my mouth dried like the Sahara. “I was on my—”

Interrupting, he rebuked, “On your way is not there, waiting as you’re supposed to be. When I return, I expect to find you waiting for me, greeting your husband.”

He grasped my arm, the harsh movement a stark contrast to the eerie calmness of his voice. “Do tell, Sara, are you blaming me for your forgetfulness?”

What the hell is his problem?

“Must I remind you of everything?”

“I’m trying to remember; I am. I’ll be there from now on, at the door, when you come home.”

“Perhaps you need a reminder?”

My body sagged and my knees weakened. The bubble within me grew and popped, filling my nervous system with dread. “No. I don’t need a reminder. I’ll remember from now on. Please give me another chance.” If it hadn’t been for his iron grip on my forearm, I might have fallen to the step where I stood.

If I had, I wasn’t sure if it would have been because of the sudden dizziness his tone induced, the bout of trembling, or that it would’ve enabled me to beg. It wasn’t something I was proud of considering, but to avoid his belt, at that moment, I was willing.

Inhaling more pleas, I nodded. When he released my arm, I stepped down and down again. Around the steps, past the closet, I found the door between the living quarters and the garage.
He was right behind me, his voice still eerily calm. “You may stand or kneel; the choice has always been yours.”

I swallowed the vile bile bubbling from my stomach. In that moment I couldn’t for the life of me fathom that merely minutes ago I had been having pleasant thoughts about this man. I also couldn’t imagine kneeling.

I brought my feet together, straightened my neck, and said, “I’ll stand, thank you.”

He reached for my chin and lowered it.

“This is where you are to be when I arrive, and if you choose to stand, your head will be bowed.” 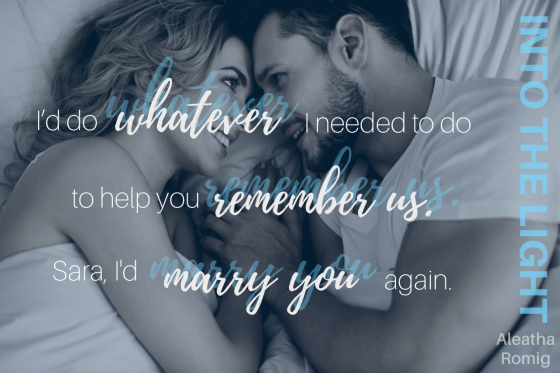 I never know what to expect when I start an Aleatha Romig book. In all honesty, when I began Into the Light, I feared it was about aliens. I should have known better. Aleatha took me on one hell of a suspenseful ride full of twists and turns that I didn’t see coming until they were in my face. This book made me mutter to myself more then once while I was trying to unlock the mystery behind her words.

Into the Light is the story of Sara, a woman who wakes up blind, unable to remember her past and completely lost in her present. She is shocked to find herself the member of a conservative church, married, and bound to do the will of the men she must serve. As a woman, I had many instances where I almost lost my mind at how the men treated the female gender. I was incensed at the humiliation that Sara had to endure. You know what? I LOVED that I was so up-in-arms about the treatment of the women in Into the Light; to me, the fact that I was so caught up in the feelings surrounding the book makes it more entrancing and hard to put down.

Into the Light has a cliffhanger ending – it was awesome! I think I am one of those rare people that loves cliffhangers. If you haven’t been Aleathea’d yet, I suggest you start immediately. She knows have to weave a story to leave you breathless for more!!!! 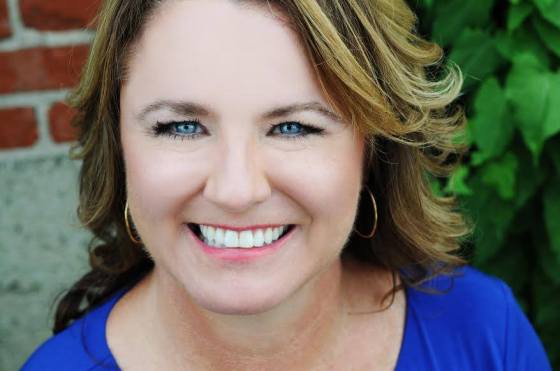 Aleatha Romig is a New York Times and USA Today bestselling author who lives in Indiana. She grew up in Mishawaka, graduated from Indiana University, and is currently living south of Indianapolis. Aleatha has raised three children with her high school sweetheart and husband of nearly thirty years. Before she became a full-time author, she worked days as a dental hygienist and spent her nights writing. Now, when she’s not imagining mind-blowing twists and turns, she likes to spend her time a with her family and friends. Her other pastimes include reading and creating heroes/anti-heroes who haunt your dreams!

In the fall of 2015, Aleatha moved head first into the world of dark romance with the release of BETRAYAL, the first of her five novel INFIDELITY series. She also began her traditional publishing career with Thomas and Mercer. Her books INTO THE LIGHT and AWAY FROM THE DARK will be published through this mystery/thriller publisher in 2016.