My heart felt like it was pounding out of my chest. Watching this whole thing unfold had made me totally lose sense of reality. I felt like I’d been experiencing every movement, every feeling right along with him, except I wasn’t allowed to come. It was as if I’d seriously lost my mind in the process. That was the only thing that could possibly explain why my body decided to betray me, letting out an involuntary sigh….moan? I wasn’t sure and couldn’t even tell you what it was except to say whatever sound I made caused Justin to jump back. His head whipped toward me, and his shocked eyes met mine for a brief second before I ran back down the stairs.

My heart felt like it was in my mouth. Escaping out the front door and down to the water, I continued to run aimlessly on the sand. At one point, about a mile down the beach, it became necessary to stop and catch my breath, even though I wanted to keep running. I’d gotten so wrapped up in Justin that I’d forgotten how sick I was this afternoon. It was all hitting me again as I stumbled over to the shoreline and vomited into the ocean.

I collapsed into the sand and must have sat there for over an hour. The sun was starting to go down, and the tide was coming in. It felt like everything was closing in on me. I knew I couldn’t avoid going home forever.

What if he told Jade what I’d done?

That I was watching him.

He was going to crucify me for this.

What excuse could I possibly give him that would explain why I was hiding behind his door, watching him ejaculate like it was a Fourth of July fireworks performance?

I decided that I needed to get home before Jade did. Maybe I could convince him not to say anything. Brushing the sand off my thighs, I made my way back over to the house.

My heart nearly stopped upon finding Justin standing in the kitchen, drinking out of a half-gallon of orange juice. I stood silently behind him and watched as he put the container back.

Justin turned around and finally noticed me standing there. His hair was wet, making it appear brown instead of blonde. He must have taken a shower to wash away the awkwardness of our encounter. Looking painfully handsome in a brown distressed t-shirt that fit his chest like a glove, he just stared me down.

I braced myself for his humiliating words. My heart was beating out of my chest as he just continued to look at me blankly without saying anything. He slowly walked toward me, and all of the muscles in my body tightened. He was going to get in my face and do it. 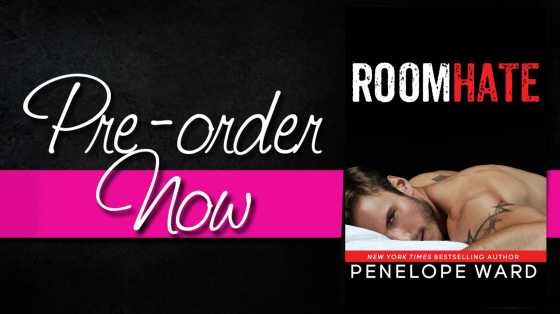 Sharing a summer house with a hot-as-hell roommate should be a dream come true, right?

Not when it’s Justin…the only person I’d ever loved…who now hates me.

When my grandmother died and left me half of the house on Aquidneck Island, there was a catch: the other half would go to the boy she helped raise.

The same boy who turned into the teenager whose heart I broke years ago.

The same teenager who’s now a man with a hard body and a hardass personality to match.

I hadn’t seen him in years, and now we’re living together because neither one of us is willing to give up the house.

I’d soon realize there’s a thin line between love and hate. I could see through that smug smile. Beneath it all…the boy is still there. So is our connection.

The problem is…now that I can’t have Justin, I’ve never wanted him more.

Author’s note – RoomHate is a full-length standalone novel. Due to strong language and sexual content, this book is not intended for readers under the age of 18.

Penelope Ward is a New York Times, USA Today and Wall Street Journal Bestselling author. She grew up in Boston with five older brothers and spent most of her twenties as a television news anchor, before switching to a more family-friendly career. She is the proud mother of a beautiful 11-year-old girl with autism and a 9-year-old boy. Penelope and her family reside in Rhode Island.