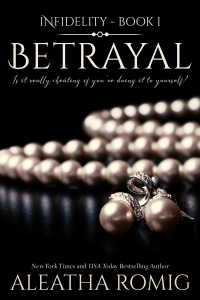 Alexandria Collins has one week to live carefree—no ghosts of her past or pressures of her future haunting her. Reinventing herself as “Charli,” she is knocked off her feet by a sexy, mysterious man who brings her pleasure like she never imagined.  With her heart at stake, she forgets that decisions made in the dark of night reappear in the bright light of day.

No one can write twisty, turny books like Aleatha. Gripping, edge of your seat, what in the world can happen now is her specialty and she does it fabulously. Betrayal ups her status to queen of dark romance. I swear that I yelled through most of the book for one reason or another and I loved it!

Betrayal rocked me. Every time I thought I knew what was going to happen, I was wrong. Alex is looking to reinvent her herself; separating herself from the stifling expectations of her previous life, she is out to secure a future away from the past that chases and suffocates her. Enter Nox, her one week love affair that gives her an escape, even if it is just for a few days. Alex and Nox are heat personified, steaming up the sheets with their heat and passion.

Really, I can not go into much more of the book. Suffice it to say, it’s a page turner worthy of your time. Aleatha is a master of words; she sculpts characters, crafts plot lines and composes her words to make a masterpiece of love, loss, and betrayal….

I’d tried to recall exactly what he’d looked and sounded like earlier that day. But with each passing hour the recollections had become embellished in my mind. I recalled the sun behind his head now as a radiating glow. His voice, deep and stirring, in my memory rolled like thunder, fluttering my tummy while melting my insides. His chest wasn’t just muscular, it was sculpted, and I no longer just remembered the sight of his dark hair and slight facial stubble. Now, my skin tingled at the thought of its touch—so real, as if I’d felt it against the most sensitive of my parts.

When I stepped past the woman and exited the glass doors, my breathing hitched.

I hadn’t embellished, not really. With the orange glow of the setting sun sending prisms dancing off the waves below, the man casually leaning against the rail was everything I’d imagined and more. Despite the ocean breeze, his casual stance, the way one hand lingered in the pocket of his pants while the other held tightly to a tall fluted glass of light colored liquid, filled me with warmth.

I was glad that Chelsea had talked me into wearing a dress and that I’d insisted on wearing panties. As he stood to walk toward me, the light gray suit coat he wore moved effortlessly accentuating his shoulders and forming a V to his trim waist. If I’d thought he was handsome in his swim trunks, he was even better in a silk suit. The white shirt he wore was unbuttoned at the neck and his strong jaw was covered with just a hint of stubble. Whoever this man was, he wore the combination of casual and class with ease.

I remained still as his grin grew and he scanned me from the top of my head to the tips of my toes. Just like earlier at the pool, the gaze of his light blue eyes burned my skin, sending a rush of heat and leaving goose bumps in its wake. I found myself lost in the paleness of his eyes, like pools of liquid, I imagined drowning in their depths, and then, they settled on mine.

“Welcome, Charli, with an I. I’m very glad you accepted my invitation.” Flutters like butterfly wings filled my tummy as I searched the horizon for clouds of an impending storm. There were none. It was him. His voice did roll like the low rumble of thunder.

“Would you like to have a seat?” he asked, reaching for my elbow and leading me toward the table.

I almost jumped at the touch of his warm skin against mine. Electricity like I’d never felt surged through my veins setting off detonations at each synapse. My eyes snapped to his, and for just a moment, I believed he felt the same thing, but just as quickly, his expression found its casual confident demeanor.

“Yes,” I said, trying also to ignore the chemistry that threatened to knock me off my feet. “Thank you. You didn’t need to go to all this work.”

Aleatha Romig is a New York Times and USA Today bestselling author who lives in Indiana. She grew up in Mishawaka, graduated from Indiana University, and is currently living south of Indianapolis. Aleatha has raised three children with her high school sweetheart and husband of nearly thirty years. Before she became a full-time author, she worked days as a dental hygienist and spent her nights writing. Now, when she’s not imagining mind-blowing twists and turns, she likes to spend her time  with her family and friends. Her other pastimes include reading and creating heroes/anti-heroes who haunt your dreams!

Aleatha released her first novel, CONSEQUENCES, in August of 2011. CONSEQUENCES became a bestselling series with five novels and two companions released from 2011 through 2015. The compelling and epic story of Anthony and Claire Rawlings has graced more than half a million e-readers. Aleatha released the first of her series TALES FROM THE DARK SIDE, INSIDIOUS, in the fall of 2014. These standalone thrillers continue Aleatha’s twisted style with an increase in heat. In the fall of 2015, Aleatha will move head first into the world of dark romance with the release of BETRAYAL, the first of her five novel INFIDELITY series.